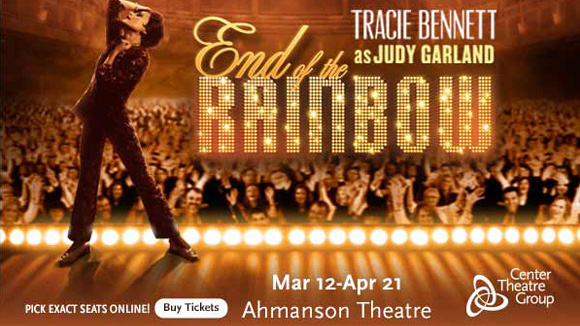 Since the Wizard of Oz is my all time favorite movie, I am definitely a Judy Garland fan and I get rather excited about live theater that highlights some of the most talented entertainment legends of our time. Which brings me to End of the Rainbow; a musical bio-drama about the last years of Judy Garland’s life beginning March 12, 2013 at the Ahmanson Theatre .

End of the Rainbow features Tony Award Nominee Tracie Bennett as Judy Garland, in one of the most celebrated performances on both the London and Broadway stage. Tracie Bennett completely embodies Garland’s signature cocktail of talent, tenacity and razor-sharp wit in this savagely funny backstage drama. End of the Rainbow focuses on the twilight years of Judy Garland’s life and her determination to make a comeback. The show portrays an emotionally unstable, addicted Garland nearing the end of her personal rainbow and perilously close to the end of her life.

Bennett’s remarkable performance has garnered her the 2012 Outer Critics Circle Award for Outstanding Actress in a Play, a 2012 Theatre World Award for Outstanding Debut Performance, along with Tony, Drama Desk and Drama League Award nominations. When Bennett and the band rip into 12 of Judy’s most memorable show-stoppers (including “Over the Rainbow,” “The Trolley Song” and “The Man That Got Away”), you will know that you are witnessing what The New York Times calls “an electrifying interpretation of Judy Garland.” As well as the Los Angeles Times saying that this show is “A Broadway performance that will long be discussed, debated and remembered, Bennett conveys, with equal parts magic and heartbreak, the paradox of being both human and immortal.”

Here at the details about this riveting show and a SPECIAL LIMITED TIME OFFER:

*Subject to availability. Not valid on previously purchased tickets.  May not be combined with other offers.  Available only for select performances and select sections. Available Tuesday – Friday evenings, and Sunday matinee between March 12 and 22, excluding March 20.  Available sections include Mid Orchestra Rows R-W and Mezzanine Rows C-G.

End of the Rainbow is a new musical that highlights the last year's of Judy Garland's life & it's is coming to the Ahmanson March 12. Read more for discounted tickets
« What Do You LOVE To Do? Diet Pepsi Encourages Us to LOVE Every Sip of Life
Oz The Great And Powerful: Theodora & Glinda Palettes From Urban Decay »

30 Days of AMAZON PRIME for FREE